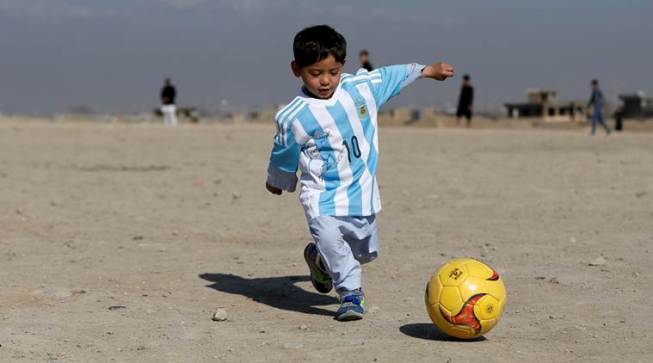 The picture of Murtaza in his plastic Messi shirt playing soccer went viral on social media two years ago. He met his hero in December last year.

Young Afghan soccer fan who shot to fame after he was photographed in a Messi shirt made from a plastic bag has been forced to flee with his family to the capital after criminal gangs and the Taliban threatened to kill or kidnap him, his mother said Friday.

Advertising
Since becoming an internet sensation, Shafiqa Ahmedi said her now 7-year-old son Murtaza a fan of Argentinian soccer star Lionel Messi has not been able to attend school and now they are living in an unheated room in Kabul. She said the cold and the damp are making Murtaza sick.

“He is always cold,” she said. Temperatures in Kabul hover around 11 degrees Celsius (52 degrees Fahrenheit) during the day.

The picture of Murtaza in his plastic Messi shirt playing soccer went viral on social media two years ago. He met his hero in December last year.

But his popularity has turned into a nightmare for Murtaza and his family.

“I wish Murtaza had never become so famous,” she told The Associated Press. “It has created a big problem for us and for him. For the last two years we have not been able to send him to school. I wish none of this had ever happened.”

Criminals threatened to kidnap Murtaza after demanding money, assuming the boy’s brush with fame somehow resulted in a windfall of money. Taliban insurgents stopped local school buses asking if anyone knew of Murtaza. They, too, had seen pictures of young Murtaza meeting Messi in the Middle Eastern state of Qatar, where he received a T-shirt from his hero.

Last November, when Taliban fighters launched attacks in their home district of Joguri in violent Ghazni province, the family fled to the relative safety of Bamiyan province in Central Afghanistan. But the threats continued.

The move to the Afghan capital three weeks ago has been painful. Murtaza is the youngest of five children and the family is paying the equivalent of about $90 a month for a room in the Afshar neighborhood in northwest Kabul.

Murtaza’s uncle Asif Ahmedi said the family received at least 10 letters and several phone calls from a variety of criminal gangs threatening to kill Murtaza or kidnap him if they didn’t give them money.

“Everyone thinks that because he became famous that we now have lots of money, but we are poor people,” he said. “The gunmen in our area were saying, `You got lots of money from Messi and you should give us the money otherwise your son will be kidnapped.”’

Criminal gangs roam freely in most of Afghanistan, which has been at war for 17 years. Most of the country’s 38 million people are dirt poor and the country’s police and army have been besieged by Taliban insurgents in near daily attacks.

Corruption is rampant in Afghanistan and many local police are in cahoots with criminal gangs.