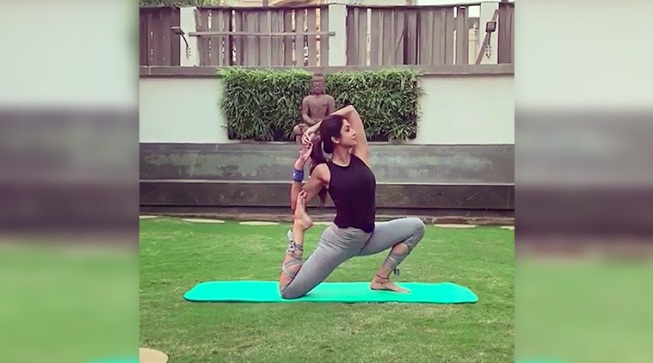 Shilpa Shetty recently shared another video where she can be seen doing Eka Pada Rajakapotasana or One-legged King Pigeon pose. And while it might look daunting, the ease with which she does it is really inspiring.

It need not be repeated that Shilpa Shetty gives us major fashion goals whenever she steps out. The versatile actor also serves as an inspiration to fitness enthusiasts.

She often shares videos of herself doing yoga, leaving fans impressed with her agility and dedication. Recently, Shetty shared yet another video where she can be seen doing Eka Pada Rajakapotasana or One-legged King Pigeon Pose. And while it might look daunting, the ease with which she does it is really inspiring. While sharing the video, the actor voiced how she too was apprehensive initially but with practice, she can do it effortlessly now.

“When I tried this Pose for the first time, it seemed a little difficult because of the intense stretch of the quadriceps and balancing on the knee at the same time.. but with consistent practice and patience, now I’m able to do it effortlessly.. reiterating that nothing is impossible.. just keep the focus, effort and discipline consistent,” she wrote.

Doing Eka Pada Rajakapotasana has several benefits. The asana increases flexibility, lessens lower back pain and also helps in reducing stiffness. It also helps in alleviating sciatic pain and improving posture. Doing the exercise also helps in opening up the hip joint. Apart from these, it also helps in releasing pent-up anxiety, fear, stress and trauma.

Previously, the actor had also shared a video of herself doing an asana that seemed similar to ‘Adho Mukha Svanasana’ (downward facing dog pose). She also performed an asana, which seemed like a variation of ‘Ardha Matsyendrasana’, which is like a seated spinal twist with many variations.

How inspired are you to perform this asana?